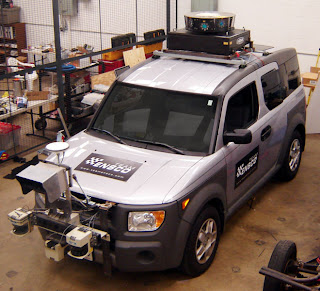 The robotics community is ready to tackle vehicle operation inside city limits.
The Defense Advanced Research Projects Agency (DARPA) will hold its third Grand Challenge competition on November 3, 2007.
DARPA will award prizes for the top three autonomous ground vehicles that compete in
a final event where they must safely complete a 60-mile urban area course in fewer than six
hours. First prize is $2 million, second prize is $500,000 and third prize is $250,000. To
succeed, vehicles must autonomously obey traffic laws while merging into moving traffic,
navigating traffic circles, negotiating busy intersections and avoiding obstacles.


The location of the event will be announced on August 9,2007 after the qualification process is complete. The course will involve a 60-mile (96 Km) urban area course, to be completed in less than 6 hours. Rules will include obeying all traffic regulations while negotiating with other traffic and obstacles and merging into traffic.

The Urban Challenge requires designers to build vehicles able to obey all traffic laws while they detect and avoid other robots on the course. This is a particular challenge for vehicle software, as vehicles must make "intelligent" decisions in real time based on the actions of other vehicles.

The event is being followed closely by auto manufacturers for the implications it holds for smarter cars and safer highways in the future.

We hope to send a team from India for the DARPA challenge in coming years.
Posted by Pankaj Chopra at 8:27 AM